It is increasingly frustrating to the watch knee-jerk reaction into Leftist Nationalism which plagues so many “Conservatives” and Rightists. Suspicion of the ordered unity necessary for stability appears to be especially pandemic  in “pan-monarchists” among others (a side note but an important one: while monarchy is among the best forms of government, it is not the only legitimate form of government). Yet how is it possible that such a blatantly Leftist ideology as Nationalism could have infiltrated so far?

END_OF_DOCUMENT_TOKEN_TO_BE_REPLACED

It’s been a while since I’ve posted an excerpt from my novel-in-process Tower of Ivory, so I thought I’d give you, my readers, a chance to read the first paragraphs, in which our hero, John Lorran, arrives at the INA, the eponymous white tower:

It was at that time that the tide of darkness was first turned back, a time of heroes and saints, of legends. The greatest of these legends begins far in the north of the world, where a young man struggles for the fulfillment of his great destiny and the fate of the world itself… (Catholic Encyclopedia 117th Edition)

The waves crashed forlornly against a bare rocky isle in the North Atlantic. Well, at least against what should have been a bare isle, if the fate of the world had been different. For clearly visible against the sky was a lofty white tower. In fact, standing on the deck of the approaching transport, the tower became visible long before the island.

Such was the view of a fifteen year old boy whose brown hair was the same color as his intelligent eyes with which he viewed for the first time this lonely section of the northern ocean. A look of caution was plain on his face as his thoughts turned toward home and all he knew…

Since the downfall of Christendom, the UN, the EU, and the United States have attempted fill the void. America in particular has stepped into the role of protector of the common order against the growing threats of terrorism. This has drawn much criticism from those who believe the American government is acting out of less altruistic motives, and has prompted the question: Does the World really need a nation acting as the “Global Policeman”?

It is essential to the International Common Good that order be maintained, and that lawful authority maintain it. So in a limited sense the answer is yes. The US, however is not a legitimate authority in this sense- even less so as the country roles down the slippery slope of immorality at breakneck speed. And really, this shouldn’t be surprising. As a nation attempts to wrestle with responsibilities that were not its own, it becomes unable to fulfill the responsibilities which it is truly bound to.

While the US tries (or had tried in the past) to protect the common order in the face of the vast collapse, this is still a pale (and unsuccessful) substitute for the tradition of Christendom. The threat which we struggle to face was very successfully countered; countered by the legitimate authority. The Holy Roman Emperor, the Defender of the Nations of Christendom, did know that his mission was to protect the Common Good, and true Morality was integral to his office. The Emperor, the Commander of the Armies of Christendom, could and did lead the West to victory, and certainly did this better than any “Global Policeman”.

“The cross on the flag,” and here he pointed to the symbol which represented the United Nations, the governing body of a majority of the civilized world, a government with the power to control the earth, “has been twisted out of shape into a circle, the sign of a devouring self-absorption, and the laurel that surrounds it is the faded glory of this world-”- Tower of Ivory Chapter I-Coming Soon!

The conflict presented in The War for Christendom is not only a physical war, but an ideological conflict and in a sense a symbolic conflict. It is a war between two Crosses, and there is a world of difference between the two.

The first Cross is the Twisted Cross, the cross bent into a shape not its own, it is the divinization of the State as the supreme good, an absolute Statism. In The War for Christendom, this worship of the state is the philosophy of a future United Nations, what the present UN could become, for the dangerous tendency is present.

In contrast to this Statism is the old Holy Empire governed by the Reichsidee, the idea of an International Law based on the Catholic principle of subsidiarity and the Common Good. The common man and the nation to which he belongs are protected by a Higher Authority, while he himself defends this Authority; truly symbolized by the Cross, for the Cross is made of two parts, each supporting the other, of Authority and Liberty each in its proper place; in a word, Freedom within the Law. 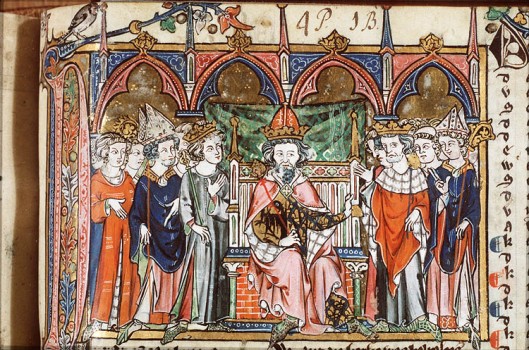 All of Modern Political Thought (based on Modern Philosophy) has been neatly summarized in a diagram known as the Pournelle Axes: 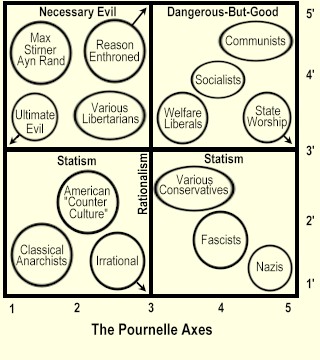 Yet all this diagram presents is a choice of evils, absolute Statism on one hand and absolute Anarchism on the other; the State as the absolute good or the Individual’s Destructive Tendencies, neither of which is ordered toward the Common Good, which is and must be the true end of all governance. END_OF_DOCUMENT_TOKEN_TO_BE_REPLACED

Why I Am Writing

Q. What was your first contact with the Hapsburgs, and what began The War for Christendom book series?

About two years ago, I (a Catholic writer with no published works to speak of- yet) wrote a short story entitled The Citadel. Set in the not too distant future, The Citadel is the story of a recently elected Pontiff forced to flee Rome, pursued by the combined forces of Islam and a corrupted United Nations, as told through the eyes of the young general of the Pope’s guard. A general named John Lorran. END_OF_DOCUMENT_TOKEN_TO_BE_REPLACED

In the first book of The War for Christendom, Tower of Ivory, the political situation is much different than it is today. Displayed on the map above are the main geopolitical forces, which are listed below: END_OF_DOCUMENT_TOKEN_TO_BE_REPLACED

John Lorran, The War for Christendom, Tower of Ivory, UN

The InterNational Academy is the United Nations’ advanced officer training facility for cadets in the Conscriptee Program. Located on an uncharted nearly inaccessible rocky isle in the North Atlantic, the main base is a ivory octagonal tower, heavily guarded. The facility’s current commander is a certain Colonel Branden, a high rankly UN official who reports directly to the President of the Security Council, Gen. Tervagan Eisengrimm. Strangely enough, the INA is a point of international tension between the UN and its allies, the Golden Caliphate and the Gòngchǎn Sphere, who press Eisengrimm to disband it.

When a fifteen year old boy named “John Lorran” is forced into the United Nations’ International Academy, he has no idea what he is doing there other than becoming a good soldier. But when he discovers the UN’s secret agenda and his training comes into conflict with his childhood faith and ancient heritage, it is up to him to decide what to do with his life.

To be published soon!