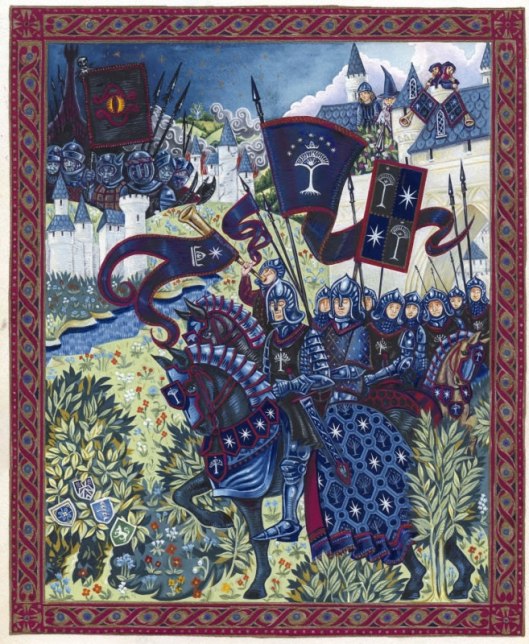 I bow not yet before the Iron Crown,
nor cast my own small golden sceptre down

The Lord of the Rings, and indeed the whole Lengendarium of John Ronald Reuel Tolkien is among the greatest influences on my overall worldview. This “story… cast in terms of a good side, and a bad side, beauty against ruthless ugliness, tyranny against kingship, moderated freedom with consent against compulsion that has long lost any object save mere power…” seems to have an almost universal appeal, it touches something deep in the soul of mankind, that there is Good, and yet there is Evil,  dark, powerful, and yet beyond all hope Good triumphs. However, for myself the enchantment of these myths and fictional histories is their deep connection with the increasingly forgotten histories and legends of my own Western Civilization.

From the humble towns and fields of the free Shire, to the great castles and cities of the Kingdoms of Arnor and Gondor, this subcreated world in many ways general and specific echoes the past ages of our own.  In the High King Elendil, founder of the great kingdoms, we can trace the archetype of the saintly king, reflecting perhaps the Emperor Charlemagne, the father of Europe. Again in the later Kings of the West, such as Aragorn Elessar, one sees the familiar kings of Medieval history and fairy tales, in particular the golden-crowned Holy Roman Emperors. The reforged royal sword Andúril in name and qualities reminds us of Durendal, the unbroken sword of Roland (the inspiration for the sword Durantar of my own writings). The knights of Rohan and Gondor, the townsfolk of the city of Bree, the Hobbits of the Shire, all are different and unique from anything in our own world, and yet remind us of the world all the same. Or rather the world as it was, the world in which the Medieval Man saw not only the war between Civilizations and barbaric tribes, but saw also with the eyes of Faith the war between elven-like Angels and orc-like demons.

By providing a glimpse of this long-lost world, Tolkien preserves and conveys to us in the present day important Truths that should not be lost. Most important of these I would argue is the ideal of Civilization, in which freedom and all good things flourish. Tolkien and his works, especially The Lord of the Rings, have been said to favor pristine wilderness untouched by the work of Man, and yet I would argue that this misses wide of mark. Where Evil spreads in Middle-Earth things grow wild and decay, the large forests such as Mirkwood grow dark and tangled, and start to die. It is in Civilization, when men are stewards and caretakers, that nature flourishes, as in the royal cultivated forests of the Middle Ages, and when the King returns, the withered tree is renewed.

What significance does this symbolic and Medieval imagery have for us in the world today? Simply that even in this world where we see daily cruelty and great evil, we ourselves can and must be good, virtuous, defenders of what is good and free,  merciful to our enemies. Important are the wise wizard Gandalf’s words to the humble hero Frodo before his quest, expressing a concept quite similar to the Medieval virtue of chivalry, “Then be not too eager to deal out death in the name of justice, fearing for your own safety. Even the wise cannot see all ends.”

One need not be a great King or knight to be a hero, as our history shows, one could be an innkeeper or even a peasant girl. To quote from the letters of Tolkien, “…the great policies of world history, ‘the wheels of the world’, are often turned not by the Lords and Governors, even gods, but by the seemingly unknown and weak.”

The rule of no realm is mine, neither of Gondor nor any other, great or small. But all worthy things that are in peril as the world now stands, those are my care. And for my part, I shall not wholly fail of my task, though Gondor should perish, if anything passes through this night that can still grow fair or bear fruit and flower again in days to come.