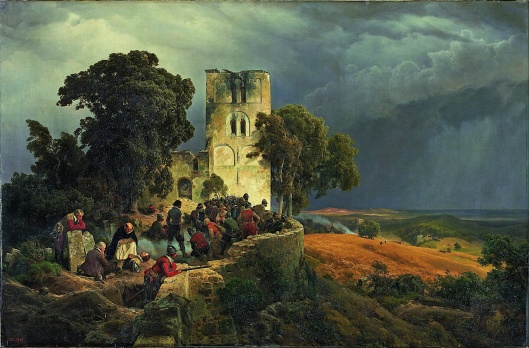 Of course in ‘real life’ causes are not clear cut — if only because human tyrants are seldom utterly corrupted into pure manifestations of evil will. As far as I can judge some seem to have been so corrupt, but even they must rule subjects only part of whom are equally corrupt, while many still need to have ‘good motives’, real or feigned, presented to them. As we see today. Still there are clear cases: e.g. acts of sheer cruel aggression, in which therefore right is from the beginning wholly on one side, whatever evil the resentful suffering of evil may eventually generate in members of the right side. There are also conflicts about important things or ideas. In such cases I am more impressed by the extreme importance of being on the right side, than I am disturbed by the revelation of the jungle of confused motives, private purposes, and individual actions (noble or base) in which the right and the wrong in actual human conflicts are commonly involved. If the conflict really is about things properly called right and wrong, or good and evil, then the rightness or goodness of one side is not proved or established by the claims of either side; it must depend on values and beliefs above and independent of the particular conflict.A judge must assign right and wrong according to principles which he holds valid in all cases. That being so, the right will remain an inalienable possession of the right side and Justify its cause throughout. (I speak of causes, not of individuals. Of course to a judge whose moral ideas have a religious or philosophical basis, or indeed to anyone not blinded by partisan fanaticism, the rightness of the cause will not justify the actions of its supporters, as individuals, that are morally wicked. But though ‘propaganda’ may seize on them as proofs that their cause was not in fact ‘right’, that is not valid. The aggressors are themselves primarily to blame for the evil deeds that proceed from their original violation of justice and the passions that their own wickedness must naturally (by their standards) have been expected to arouse. They at any rate have no right to demand that their victims when assaulted should not demand an eye for an eye or a tooth for a tooth.)

Similarly, good actions by those on the wrong side will not justify their cause. There may be deeds on the wrong side of heroic courage, or some of a higher moral level: deeds of mercy and forbearance. A judge may accord them honour and rejoice to see how some men can rise above the hate and anger of a conflict; even as he may deplore the evil deeds on the right side and be grieved to see how hatred once provoked can drag them down. But this will not alter his judgement as to which side was in the right, nor his assignment of the primary blame for all the evil that followed to the other side.

3 thoughts on “The Rightness of a Cause”