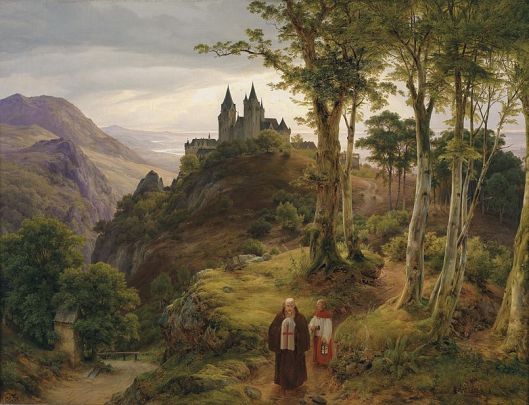 After the death of Conradin, the grandson of the heretic Frederick II, the Empire was thrown into a lawless chaos now called the Interregnum. Men forsook the laws that had governed them and turned to robbery and violence, especially in the region of Southern Swabia (now Switzerland) near the High Rhine and the Aar. Below follows a proximate translation of the history of Count Rudolf IV von Hapsburg, taken from the Chronicon Helveticum (which in turn was taken from earlier sources such as the Chronik der Königsfelden ):

END_OF_DOCUMENT_TOKEN_TO_BE_REPLACED

In 1264, Pope Urban IV issued the Papal Bull Transiturus de Hoc Mundo, promulgating to the Latin Rite the Solemn Feast of the Body and Blood of Christ, to be celebrated on the first Thursday after Trinity Sunday. Around this same time, Rudolf the eighth Count of Hapsburg aided and protected a priest bringing the Viaticum to a dying farmer, giving the priest his horse and guiding him across a raging torrent, walking bareheaded. The priest then prophesied that the humble Count and his descendents would receive the Imperium of the Holy Roman Empire.

END_OF_DOCUMENT_TOKEN_TO_BE_REPLACED 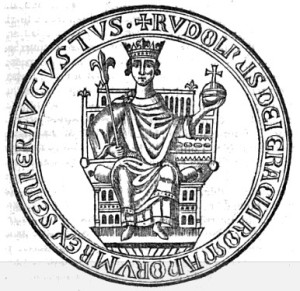 One of the Greatest of the Sacretemporal (Medieval) Hapsburgs, Rudolf I was the eighth Count of Hapsburg, and the son of Count Albrecht IV, born on May 1, 1218.  Upon his father’s death on Crusade in 1239, he inherited the Hapsburg lands in Aargau and Alsace. A just count and a holy man, he had a personal devotion to the Holy Eucharist, which would be passed on to his descendants. A faithful Catholic, he was nevertheless briefly excommunicated for supporting his godfather the heretical Emperor Frederick II and Frederick’s son Conrad IV, however the excommunication was soon lifted upon Conrad’s death in 1254 END_OF_DOCUMENT_TOKEN_TO_BE_REPLACED

BERNARDO TOLOMEI, son of Mino Tolomei, was born in Siena on May 10, 1272. At his Baptism he was given the name “Giovanni”. He was probably educated by the Dominicans at their College of San Domenico di Camporeggio in Siena. He was knighted by Rudolph I of Habsburg (1218-1291). While studying law in his home town, he was also a member of the Confraternity of the Disciplinati di Santa Maria della Notte dedicated to aiding the sick at the “della Scala” Hospital. Due to progressive and almost total blindness, he was forced to give up his public career. In 1313, in order to realize a more radical Christian and ascetic ideal, together with two companions (Patrizio di Francesco Patrizi, d. 1347 and Ambrogio di Nino Piccolomini, d. 1338), both noble Sienese merchants and members of the same confraternity, he retired to a family property in Accona, about 30 km south-east of the city. It was here that Giovanni, who in the meantime had taken the name “Bernardo” out of veneration for the holy Cistercian abbot, together with his two companions, lived a hermitic penitential life, characterized by prayer, manual work and silence.