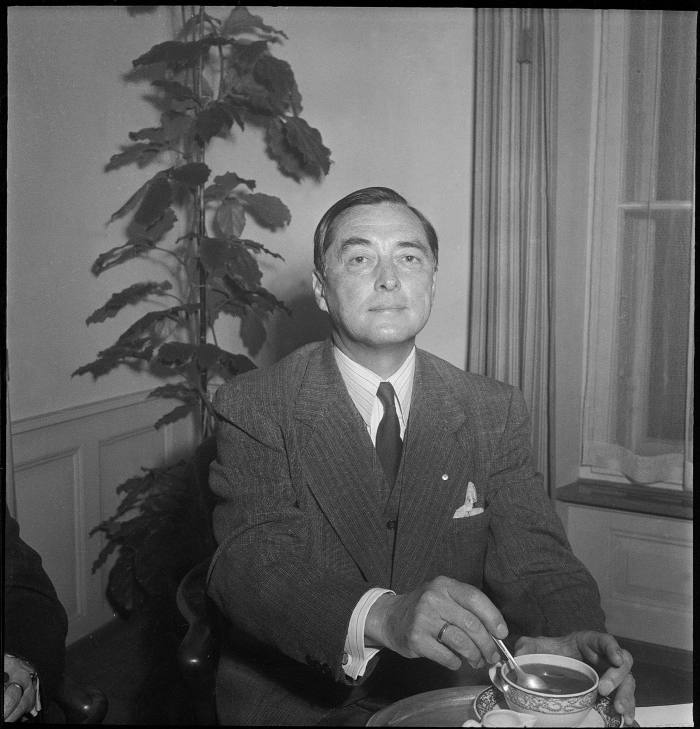 Richard Nikolaus Eijiro, Graf von Coudenhove-Kalergi, one of the most influential and mischaracterized founders of the Pan-European Movement, was born in Tokyo in 1894, the first son of the Austrian-Hungarian Ambassador Heinrich von Coudenhove-Kalergi and Mitsuko Maria Aoyama, a Japanese convert to Catholicism. The Coudenhove family were Flemish nobles who inherited the patrimony of the Greco-Venetian Kallegris, and Aoyama was the daughter of a moderately wealthy Japanese commoner. Richard was raised in Ronsperg, in the Austrian Crownland of Bohemia, the second eldest of seven children, and was destined to follow his father into the diplomatic service. Though exempt from service due to his studies at the Theresianum, his first hand experience of the horrors of the first “European Civil War,” and the growing menace of Soviet Russia convinced him of the necessity of Pan-European federal state, one capable of standing militarily and economically against Bolshevism.

In 1923 he published Pan-Europa and in 1925 his most controversial work, Practical Idealism, was written. This is the source of the infamous “Kalergi Plan” or “Great Replacement” conspiracy theory, which upon a truly careful examination of the work is shown to be completely groundless. Inspired along similar lines as European conservatives Ernst Jünger and Ernst Rüdiger von Starhemberg, Richard saw a hybrid form of “worker-soldier” as a bulwark against Communism and the future soldier in the battle for the salvation of Europe. Having already envisaged the disappearance of the nation-state in ‘Pan-Europa,’ and drawn in by the racial science of the time, he predicted the merging of Europeans, Asians, and Africans into a single race of diverse individuals, as the natural outcome of historical trends. This prediction (not plan) does have some basis in reality, as Europe is defined by its constant influx of peoples, each adding a definite characteristic to European life, yet today might be seen as overly “optimistic.” A deeply religious man, Coudenhove-Kalergi saw the necessity for a spiritual and intellectual leadership and he saw the quality of that leadership in the Jewish people he interacted with during his early life. His father had begun the work The Essence of Antisemitism intending it to be something of an Anti-Semitic tract, but his research soon led him to a profound respect for the Jewish people, a respect he would pass on to his son. Jews and Jewish converts to Catholicism such as Joseph Roth, Stefan Zweig, and Friedrich von Weisner formed the core and leadership of Vienna’s Conservative Intellectual Elite in the period following the catastrophe of the First World War. Richard had himself married Jewish actress Ida Roland in 1915, with the result of his mother banning him from family gatherings.

In 1926, as a result of the increased popularity of his book Pan-Europa, the first Pan-European Conference was held, and had the political support of Austrian Chancellor Ignaz Seipel and French Foreign Minister Edouard Herriot. Coudenhove-Kalergi began to look for broader support elsewhere, and at first the authoritarian and Roman universalist language of Fascism appealed to him. In 1927 after a falling out, he left the pseudo-Masonic Humanitas lodge, which he joined in 1921, never to return to the Masons (though he kept friendly contacts with them). In 1932 at the third Pan European Congress, members of the Pan-European Youth Movement adopted aesthetically “fascist” uniforms. Nicknamed the the “Blue Shirts,” the fact that their public appearance so closely mirrored the Fascists caused quite a scandal in the more democratic Western Countries of France and Britain. In 1933, Hitler banned the Pan-European movement as “un-German,” and Richard, already friendly with the Dollfuß regime, sought an alliance with Hitler’s main rival, Mussolini. Though visiting the dictator several times, and even being interviewed by noted superfascista Julius Evola, Pan-European idealism made no headway with the National Populists of Italy. Thoroughly disillusioned with Fascism in 1937, he wrote, “We are experiencing the most dangerous revolution in world history: the revolution of the State against man. We are experiencing the worst idolatry of all time: the deification of the state.”

Fleeing to the United States in 1940, throughout the war he advocated for the creation of a United European State, to prevent a return to the terrors of Nazism and to protect against the denigrating influences of Western Secularism and Soviet Atheism. It was during this crucial juncture that his collaboration with Archduke Otto von Habsburg truly began.

In post-war Europe, Coudenhove-Kalergi never surrendered his Pan-European vision, despite the complete occupation of the eastern half of Europe by Communism. His movement shifted further to the Conservative Right while inspiring such politicians as Konrad Adenauer and Alcide De Gasperi and he often talked of restoring the patrimony of Charlemagne and the unity of Medieval Christendom. In 1967 he returned to Japan for the first time since childhood, where he was awarded the First Order of the Sacred Treasure by Emperor Hirohito. In 1970 he returned for the second and last time to his birthplace. In 1972, Richard Eijiro von Coudenhove-Kalergi died suddenly in Schruns, Austria. The official cause of his death is given as a stroke, though there is some speculation that his death was suicide, and he was given a private funeral in the family parish. Otto von Habsburg took over leadership the Pan-European Movement, which continues to this day to promote a truly unified and Christian Europe of Fatherlands. But unfortunately, the main legacy in the modern world of this great man is that of the Nazi and Soviet propaganda which sought to portray him as the destroyer of the very Europe that he spent his life serving.