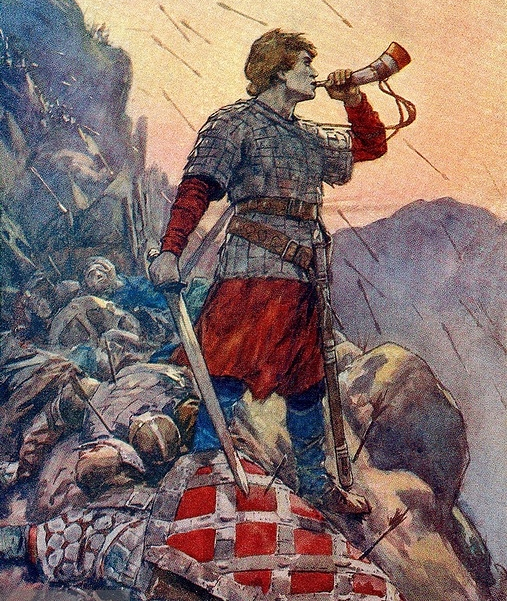 Far, far across the hills echoed the song of the Olifant of the Palatines. In the vanguard of his army Carolus Goldencrowned heard it beyond the Pass of Runcievalles, summoning the riders of the King of the West. Now swiftly they rode, their own horns giving answer, swiftly to brandish bright swords against the enemies of the free realms. Alas! too late had come the summons and what aid now could save those valiant knights of Christendom?

Skilled were his riders, but the King rode swifter, despite weariness won in hard battle. To the cleft of the pass he came, to that field now desolate, where lay the bodies of Fierabras the fierce Saracen, Eginhard the steward, the Count Oliver Anselmus, and many more such valiant men. And in their midst, his lorica riven and bloodied, under it his ringmail rended, his great cloak torn, shield shattered, yet sword unbroken, was Roland, Marchcount of the Bretons, mighty Caroling lastly fallen. By the still warm body Carolus knelt, and wept over his slain sister-son. Suddenly the eyes of the Count opened as he clutched for the blue silken tunic of his King. “Salve Emperor crowned of the Romans!” hailed he weakly with his last strength, “so it must be, for I see it now on the edge of death, my liege. The time will come when it so.”

“Oh uncle, the Saracens were great warriors, even the pagans of the mountains fought mightily, we held them at bay even as the Burgundians fought the Eastlings in the days of Siegfried- Oliver Anselmus urged me to sound horn and summon help, but were it not for my pride he should not be dead upon the field there! No, no, there is no time to mourn… it is so cruelly cold.” Unclasping his great mantle lined with ermine and caring not for stain or silt, King Carolus cast it over his nephew, whose blood streamed anew down his cheeks staining cold stone. “Yet more I see, and am compelled to tell. Beware the Eastlings who will come once as they came in the days of Etzel, and good will come of them if their tyrants be overthrown. Long shall thy successors outlast all the enemies of men, staving off as they may long defeat and the decaying of time.” “Alas, it is ill,” cried the King, “that the tyrants of the Saracens should overrun the Kings of Freemen in the last.” “Nay, it shall be thine own peoples, Franks and Saxons and others of thy realms, from whom the fey blow shall fall, and so the sorrow of it to thy heart is made greater. Usurpers shall descend upon Aachen, upon Rome and Rheims, and the peoples shall set up tyrants for themselves, killing wantonly foreigners and kinsmen alike, once many ages have passed from this very day.”

“The land of Varanings dawns red as with fire, fierce in its waxing, and terrible in its waning shall it be, overrunning the world, and lands yet even now unknown. Against it rallies a dark tide under the signum of a desecrated cross, and the war of these armies shall be the rending of the world.” In agony both King and knight looked eastwards as the darkening night encircled them, and Carolus spoke mournfully, “By the sword of Holy Mauritius the Black it is as I have often feared. The Kingdoms of Christendom shall come to naught but strife and division, and my line shall be ended in bloody conflict.” A new light entered Roland’s eyes as the stars were kindled above, and more forceful was his speech than it had been. “No my lord, thy line shall not end in this strife of coming ages. Remember that thy mother Bertrada was of the Alpen, and that long lineage is granted to those of the Swan-folk. I see now the Untarsberg in the Ostarrîch, three eagles circle it. Through seasons and years always there are three flying that guard its summit, until the day foretold comes. Deep, deep in the Mountain are great halls and keeps dwerg-carven in the days of Alberich, to them shall a young knight come. There shall you greet him my lord, and there give the gift he must bear to the Prince of the Aaren, the heir of the Sea-Kings of old. O Orentil! O Oriens, hweo lang werd finstarheit regieren, odar der lioht duran?”

With this Roland fell deadly silent, and of what he saw then, whose mortal tongue can aptly tell?

4 thoughts on “The Vision of Roland”