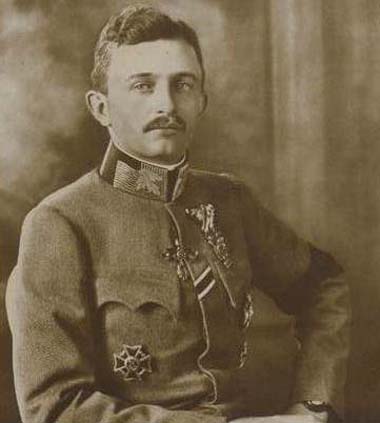 From the beginning, the Emperor Charles conceived of his office as a holy service to his people. His chief concern was to follow the Christian vocation to holiness also in his political actions.

In a time of war and destruction, when all the safety and comfort of society was collapsing, a noble man gave his life for his peoples. For two long years he pleaded with his enemies to find some way to bring peace to his war-torn country. He began a wave of reform which swept away the corruption and decay which the war had brought to light. But he was alone, his enemies were relentless and his allies unwilling to give up on the phantom of total victory. In the end he died alone, exiled on an island far from his homeland. Yet his son took upon himself his father’s burden, and lived to see the evils his father had struggled so fiercely against utterly destroyed.

This story sounds so much like a myth, a fairy-tale to inspire children. But this is only because fairy-tales are the closest to true history of all stories we tell. You may well ask in this age of corrupt politicians and mob mentality, is it even possible that one man could stand against the world of his time, and so courageously that his impact on it remained long after his death? My answer to you is yes, that this man lived, and that his name was Karl von Habsburg-Lothringen, by the grace of God, Emperor and King. And most surprisingly of all, the time he lived in was much worse than our own.

This seems shocking and in a way it is. How could it be worse, when there is so much evil in our own time that we struggle to fight it? That we feel like simply giving in, abandoning the fight, surely this is a sign that our struggle is much worse than his. Surely nothing could be worse than the degradation of the Church through the scandals (real and fabricated) surrounding her bishops. I will not deny that we are living through a great crisis. But I will say that our darkest night has already passed. It may sound cliche to say we are standing at the crossroads; this doesn’t change the fact that we really are. Every day of our lives we are offered a choice, yet today I challenge you to make the Right Choice, the steep, narrow, and long road towards a better dawn. And I point you to the man who will be your guide on that road, the man who made that very choice one hundred years ago this year, this month, this very day. His name is Karl, a poor mortal sinner, but by the grace of God, a Saint.

Our excuse is that our times are so much worse, our evils so much harder to fight, than they were for him. This is nonsense! God never permits us to endure more evil than he knows we can endure, and we have shown Him we can endure very little. Yes we suffer wars, terrors, and disasters. Have we seen war on the scale that embraces the entire globe? Disease that wracked the world afflicting millions? These were the conditions under which Blessed Karl lived and suffered, striving for peace without success, for reform without success. But never in vain, for God who sees and knows all things, saw and accepted the Blessed Emperor’s struggles, and did not permit that they be in vain. Though the suffering of the world greatly increased, the worst of it ended when the very son who committed his whole life to his father’s work, could see it end. And now we stand, after the worst is over, on the very crossroads of choice between a better dawn or a darker night. All we need is one man’s choice, to choose to sacrifice all for the good of others, to follow in the painful footsteps of the Emperor. And I challenge you my reader, whoever you are, to be the one ready to make that choice.

What does this better dawn really entail, what concrete vision can we have for a better political life? In the words of the great Catholic author Gene Wolfe, we are ever searching for a time when we had “a society in which the laws were few and just, simple, permanent, and familiar to everyone — a society in which everyone stood shoulder-to-shoulder because everyone lived by the same changeless rules, and everyone knew what those rules were. When we had it, we would also have a society in which the lack of wealth was not reason for resentment but a spur to ambition, and in which wealth was not a cause for self-indulgence but a call to service.” It was this very society which one hundred years ago came crashing down around the Schönbrunn palace as a strained Emperor tried desperately to hold it all together, betrayed by men motivated by every base element of human nature. Well those base and vile men have had their time, now it is our turn. Now it is our chance to lead struggling humanity back to the right path, as far as we can take it.

To do this it is not merely enough to act, we must act in way that truly serves our goal. In describing his childhood, Gene Wolfe describes how he was “taught a code of conduct: I was to be courteous and considerate, and most courteous and most considerate of those less strong than I… Less educated men might hold inferior positions, but that did not mean that they themselves were inferior; they might be (and often would be) wiser, braver, and more honest than I was. They were entitled to respect, and were to be thanked when they befriended me, even in minor matters. Legitimate authority was to be obeyed without shirking and without question. Mere strength… was to be defied. It might be better to be a slave than to die, but it was better to die than to be a slave who acquiesced in his own slavery. Above all, I was to be honest with everyone. Debts were to be paid, and my word was to be as good as I could make it.” It was this very code that Blessed Karl followed unwavering throughout his life, that carried him through his childhood, through the war and his reign, and ultimately through exile and death. And it is by following him in his adherence to this code of conduct that we can make the first steps on the long journey to a better world. Believe me, it will be a long and very hard journey, and I pray that God will give me the grace to see it through as long as He wills me to travel it.

5 thoughts on “The Legacy of Blessed Karl 100 Years Later: A Call to Act”