Pay heed to the tales of old wives. It may well be that they alone keep in memory what it was once needful for the wise to know.- J.R.R. Tolkien

Legends are often dismissed in modern times as completely unhistorical, as children’s tales which have no relevance to modern man. History, they say, is just an endless pointless cycle driven by greed or lust for power- or history is always progressing, until it inevitably progresses past your “fairy tales.” However, to those who know the truth, there is more history in a single “Medieval” legend than there ever was in any modern book of history.

Kings oftentimes really were noble, just, and wise. Knights really were courageous, and peasants were free. This world is really a wonderful, dangerous yet adventurous world, if you open your eyes to it. Heroic Kings like Arthur and Albert really fought to save civilization, and they succeeded despite all odds. The rise of the Holy Emperors actually happened, while the fall of the Roman Empire under “Germanic Barbarians” almost certainly did not.  The old stories still told about the Sacred Ages were once a reality, and the High King of Christendom once defended the Catholic realms from invasion and decay. And now these truths are deliberately suppressed- or worse, “revised” to promote modern heresies.

Yet there is one crucial truth which still resounds through the ages like the song of the horn of Roland greatest of knights, which cannot be silenced. This is the Truth that the world is divided in war between light and darkness, between good and evil, and though the good and the light is at times driven back, it can never be defeated, and will triumph in the end. Saints and heroes, Emperors and kings, and above all ordinary decent folk have all fought in the defense of Truth and Freedom, in the face of falsehoods and tyranny. The meaning of the old tales is clear: We must do the same.

And when we, inspired by the great heroes of old, follow faithfully the commands of our Heavenly King, perhaps someday new songs and lays will be written and remembered, by those who still know the truth.

Charlemagne, the great Christian emperor, has at last established his empire in quiet, has done justice almost in the manner of a day of judgment, and sleeps as it were upon his throne with a peace almost like that of Paradise.  And there appears to him the angel of God crying aloud that his arms are needed in a new and distant land, and that he must take up again the endless march of his days…  For that war is never ended which defends the sanity of the world against all the stark anarchies and rending negations which rage against it for ever.

-G.K. Chesterton, The Song of Roland 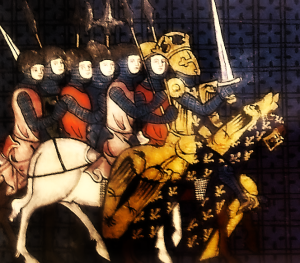