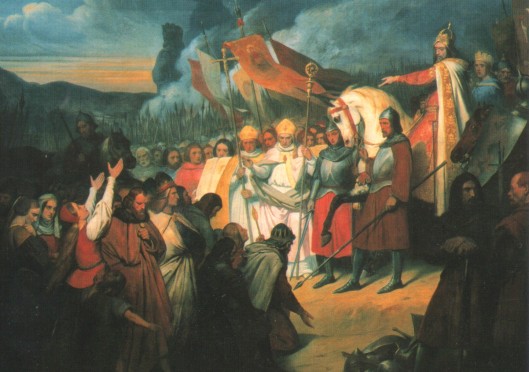 It is when a fact is thus too big for history that it overflows the surrounding facts and expresses itself in fable. Nay, it is when the fact is in a sense too solid that its very solidity breaks the framework of ordinary things; and it can only be recorded through extraordinary things like fairy-tales and romances of chivalry. Everybody felt that merely saying that one Carolus or Carl had lived and died at a certain date, and had a palace at Aix, and fought such and such campaigns against Saxons or Saracens, was wholly inadequate to explain what had happened.

“Nothing short of saying that Charlemagne was ten feet high, or that he lived for two hundred years, was at all upon the scale of what had happened. For what had happened was that in the dead and deserted lands on which the world had turned its back, in the densest and blindest forests of relapsing ignorance and decay, there had come a vision; a vision of light and loyalty and order or the wild possibility of these things; white against the darkness, the face of a great king; a face never to be forgotten. It is impossible to describe, or perhaps even to conjecture, exactly how these things affect mankind. Wherever they occur, they become the legends that are larger than history. Such has been the tradition of King Arthur in Britain. Such has been the tradition of St. Patrick in Ireland. But these great men were in their time inevitably more localized; they were not in a central position to represent the whole world, like an Emperor crowned by a Pope. Yet this had happened relatively at the ends of the earth where no man expected it. It may be compared to a miracle if only by a metaphor. For it was a Sunrise in the West.

Men had to imagine Charlemagne; it was inadequate merely to record him. But being imagined is not the same as being imaginary. It is sometimes the wildest effort of imagination for a man to imagine what he actually sees. But in historical retrospect the paradox I have noted remains. In order to imagine him, we have first to unimagine him. We have to realize the difference that his disappearance from history would have made. I believe myself that, but for this episode, our Western world would at best have developed quite differently, and most probably not developed at all. From the Carolingian episode comes the whole of that conception of Chivalry, which has become the secular morality of the West; and a thousand times more so because the glory from which it comes is not only glory but in some sense defeat.

Chivalry is in itself a new and Christian view of defeat. Charlemagne, like Arthur, owes his everlasting success to the fact that he did not succeed. He did not heal the barbarian wounds of the West, but he showed men a sort of hope of their being healed. In the story of Roland, and in all the stories since derived from that origin, there is exactly the same secret of defeat that is not despair.

-G.K. Chesterton, The Resurrection of Rome

1 thought on “G.K. Chesterton on the Legend of Emperor Charlemagne”