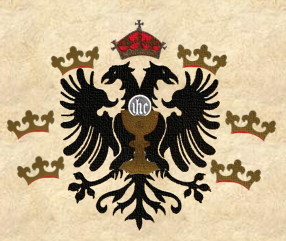 “The most important feature of a well-established and (nationally as well as internationally) recognized monarchy should not be forgotten- legitimacy. Without legitimacy it is impossible to imagine the binding power of agreements, of stability, and peace.”– Erik von Keuhnelt-Leddihn, The Menace of the Herd

The restoration of Catholic government in the Germanies is an essential part of the restoration of Christendom as a whole. It is obvious that this cannot be legitimately accomplished by a Republic or a return to Prussian (or Prussianized) autocratic rule. This raises the problem of legitimate rule, which (though some wish to ignore the fact) is very much a crucial issue. Before discussing legitimacy further, it must first be stated that the in the return of Catholic rule in Europe necessitates the reincorporation of the Germanies (and this includes Belgium, the Netherlands, and Switzerland) as Sovereigns States subsidiarized in the Reich (understood not in the shallow National Socialist sense, but in the deep tradition of Christendom’s Holy Empire).

In answer to question who can claim a uniting legitimate rule of the Germanies, and by extension the Crown of the Empire, I present here the threefold claim (twice familial, and once individual) of the House of Hapsburg, which alone has legitimate claim:

For the first time in the history of Christendom, a priest of God prophesies that the Imperium will be granted to a virtuous man and his family, for God had not abandoned the Reich even after the failures of the Ottonian and Hohenstaufen Emperors.

There exists no Catholic Royal Family with claims of legitimacy to the rule of the Germanies equal to that of the House of Hapsburg, and because of the importance of the principle of legitimacy, restoration of a German Monarchy under any other house,  the Hohenzollerns for example, becomes an untenable position, even ignoring for the moment that such a monarchy would be centralist and not founded on the principle of subsidiarity. Such an attempt would only revive the current political mess. No, our trust must be in the legitimate ruler and the promises of God.