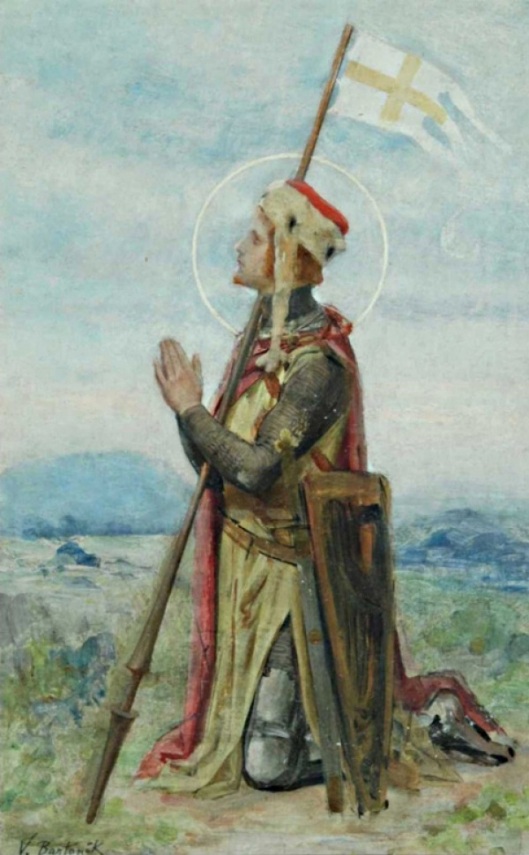 Saint Wenceslaus (Václav) of Bohemia is perhaps the most well known of the noble-born saints of the Sacred Ages. Born around the year 907, Wenceslaus was primarily educated by his father Duke Vratislaus and after his father’s death (when his son was only thirteen) his grandmother St. Ludmila. Both Vratislaus and his mother Ludmila were both intent on spreading Catholicism in the many still pagan parts of the realm of Bohemia, and after her son’s death the Duchess took over the education of her grandson to keep him away from the influence of his pagan mother Drahomíra.

Duchess Drahomíra became regent of Bohemia upon her husband’s death, and Ludmila fled from the capital city of Prague to the castle of Tetín with her grandson in 921. There she was strangled by two nobles loyal to Drahomíra, and shortly after her death she was canonized as a martyr. In 922 at the age of fifteen, Wenceslaus exiled his mother and assumed full government as Duke of Bohemia, swearing allegiance to Henry I the Fowler, King of Saxony during the interregnum following the death of Holy Roman Emperor Berengar. Three years later the saintly Duke recalled his mother to Prague, and pardoned her part in the death of his grandmother. Favorable to the Latin Rite (the old Slavic Rite having fallen into disuse), Wenceslaus founded the what is now the Cathedral of St. Vitus in Prague. Under his reign Catholicism flourished, in spite of violent pagan raids.

At the age of eighteen, Wenceslaus had already defeated rebellious nobles and stabilized his realm, though brought about a growing resentment among the remaining pagans. Among his people the Duke was loved for his legendary kindness and generosity, as well his sense of justice and mercy. 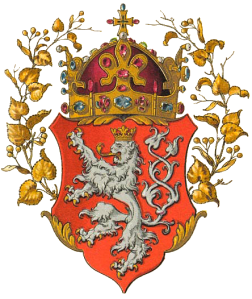 Coat of Arms of Bohemia with the Crown of Saint Wenceslaus

Wenceslaus’ younger brother Boleslav had been raised by his mother Drahomíra during her pagan days, and he soon joined the conspiracies of the pagan nobles. Covetous of his brother’s throne and despising Christianity, Boleslav invited the Duke to celebrated the feast of Saints Cosmas and Damian at the fortress of Stará Boleslav. There on September 28, 935 at the age of 28, Wenceslaus was martyred on his way to church by the nobles Tira, Česta and Hněvsa, three of Boleslav’s conspirators. As he died, the saint forgave the conspirators and his brother for the murder. Upon becoming Duke, Boreslav immediately felt remorse for his brother’s death, promising that his second son Kristián Strachkvas (born on the day of the murder) would be consecrated to the religious life.

Soon after his death Wenceslaus was declared  a saint and the Patron of the Czech People. Devotion to him spread throughout the Slavic Lands, the Holy Roman Empire, and even as far as the Kingdom of England. Holy Roman Emperor Otto I the Great in tribute to the great Saint gave Wenceslaus the tittle of King, by which he is most commonly known to today, and the Crown of Bohemia dedicated to his patronage (which by marriage came into the possession of the Hapsburgs) remained an integral part of the Empire, even coming to be given the Privilege of being one of the Electors of the Emperor. By his intercession, Bohemia and Moravia were regained from the heretical Hussite rebels, and by his intercession today the Czech people may yet regain their ancient faith and King.

2 thoughts on “Saint Wenceslaus: Duke and King of Bohemia”