A hush fell upon the multitude of the faithful as they assembled in the nave of the great Basilica of Saint Peter. Even on the great feast of the Nativity of Our Lord, many were troubled by the dark rumors out of the East. Messengers from the city of Constantine had brought tidings of the murder of the Roman Emperor and the vacancy of the throne, while both in the eastern and western borders of the Empire were falling to the war-loving tribes of the desert. A council had been convoked, and the wise men of Rome gathered about the Holy Father, for it was clear that something must be done.

Through the atrium and into the basilica a single man walked. Tall, taller than most men of that day, not large but strongly built, with hair that was turning grey and bearded, dressed in the tunic and breeches of a Northerner but wearing over them the dalmatic and mantle of a Roman and with a sword sheathed at his side, everything about him suggested that he was a great man, but nothing showed this more than the shining vision in his eyes. He was a man to be sure, with the faults and failings of fallen human nature, yet nevertheless as he knelt humbly before the High Altar which stood over the sepulcher of Saint Peter, none doubted that he was holy as well great.

His name was in Latin Carolus, the King of the Free Peoples of the West. Though long and hard his life had been, he was yet filled with an unquenchable fire of joviality. Like his grandfather whose name he bore, he was devoted to the defense of Christendom, and a loyal supporter of the Roman Emperor. Earlier this month he had come to Rome, to save the Pope and restore him to his rightful place as Supreme Pontiff. Now he was deeply troubled, though the mightiest of mortal men, for he feared the end of the Empire was at hand. But he did not dwell on his worries, instead contemplating the holy birth of the Savior of All, so soon to be present on the Altar.

The clergy in the choir began the chanting of the introit, for he had come. His Holiness Leo, third of that name, processed into the sanctuary through splendor of gold and incense with the cross before him and many priests about him, while the choir chanted: Dominus dixit ad me, Filius meus es tu, ego hodie genui te.

At the Gloria Patri, the Holy Father made the solemn Sign of the Cross, the Sign by which Constantine had conquered, and turned towards the kneeling King. Taking a mitred cap (such as a bishop would wear) from the mantled hands of a priest, he quickly placed it on the head of Carolus, who looked up with the wondrous innocence of surprise. Then taking a precious vessel of Blessed Chrism from another priest, he anointed the King’s forehead and hands.

Finally, from the hands of a third priest, the Pontiff brought forth a great golden crown, eight-sided and surmounted by a cross and a single high arch. In the midst of the crown was a great jewel, a stone with no like upon the Earth, for it shone pure white yet through it ran a vein of glowing red like blood or living fire. Placing this crown over the mitre on the head of Carolus, the Vicar of Christ said in a low voice, “Receive this sign of Glory, as Emperor of Romans.”

Then he spoke aloud, “Ad Carolus serenissimus Augustus a Deo coronatus magnus pacificus imperator Romanum, Salus et Victoria!” With one voice all the faithful resoundingly replied, “Salus et Victoria!” Three times this was said and there was great rejoicing at the coronation of the Emperor. Now, for the first time in history, the Catholic Ideal of Christendom was  made a reality, and the Authority of Christ proclaimed from the Imperial throne. Now the Roman Empire was truly a Holy Roman Empire, and though none then knew it, from the line of this Emperor would come the greatest of the Noble Houses and the Restorer of the Christendom. 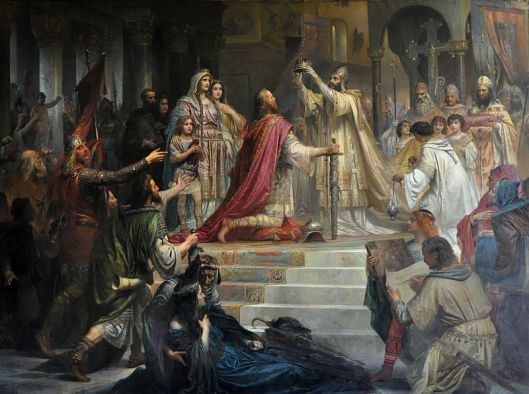 A Merry and Blessed Christmas to All!