Read Part I: Reich or Wrong

“For example, they will often tell you (in their praises of the coming age) that we are moving on towards a United States of Europe. But they carefully omit to tell you that we are moving away from a United States of Europe, that such a thing existed literally in Roman and essentially in mediaeval times. They never admit that the international hatreds (which they call barbaric) are really very recent, the mere breakdown of the ideal of the Holy Roman Empire.”– G.K. Chesterton, What’s Wrong with the World 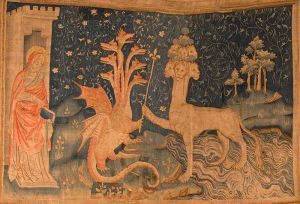 With the admirable exception of our friend Tribunus over at Roman Christendom, few if any Catholics on the web remember or ever even learned about the Catholic Holy Roman Empire.

This is not the case with some Protestants, especially the world’s-ending-prophesying ones. Yet their knowledge is not laudable, especially as it is mostly misinformed. Not one in ten of them could tell you of the sanctity of Blessed Karl I or St. Henry II when questioned. And their ignorance goes deeper still, as they apply to the Sacred Book of Apocalypse (or Revelations) their own Anti-Catholic pet theories about the First Reich.

Let us examine three features these Anti-Catholic rants all have in common:

The saddest part of all this is that Catholics do not know their own history or the prophecies of their Saints. Force fed Anti-Catholic garbage through the Secular and Protestant medias, how many Catholics know the prophecy of Saint Bridget, “At last the Eagle will come from the North to the West. The Eagle will also invade the Mohammedan countries“? How many Catholics have heard of the Prophecy of Six Crowns?

What can we do to change this? Encourage good Catholic histories like Dr. Warren Carroll’s books. Spread Chesterton and Belloc. And above all pray.

God has promised us a Restoration of the Holy Roman Empire, and at this we should rejoice and be glad. Until the line of Hapsburg fails and the blood of Bl. Karl runs dry, we can and should pray for the swift resurrection of Christendom, and we should ever work towards that goal.

Though long the Faithless Ages run: (Kyrie Eleison)
Yet ever upon our shields is drawn
An eagle darker than the night: (God send us holy Light)
That comes before the Golden Dawn.

“Let us pray also for our most Christian Emperor that the Lord God may reduce to his obedience all barbarous nations for our perpetual peace. O almighty and eternal God, in whose hands are all the power and right of kingdoms, graciously look down on the Roman Empire that those nations who confide in their own haughtiness and strength, may be reduced by the power of Thy right hand. Through Christ Our Lord Who lives and reigns in the unity of Holy Spirit, one God forever and ever.”

Please continue reading The Holy Roman Empire in Modern Times in the third installment New Dynasties or Not: Can the Hapsburgs be Replaced?